Lint rollers, those rolls of sticky tape, are great for getting pet hair and lint off from clothes. What may not be so obvious is that they are also extremely useful in the sewing room.

Keep lint, stray threads and more under control with these handy devices. Before long, you’re likely to consider a lint roller an essential sewing tool. 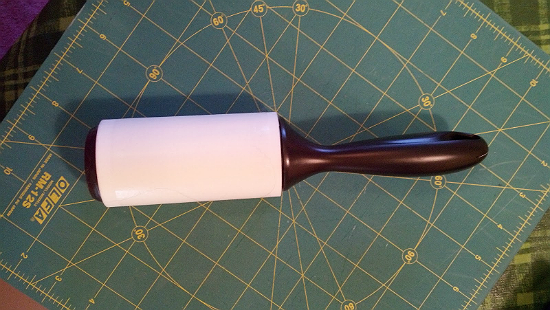 We’ve compiled a list of uses below, and you’re likely to think of more.

For greatest efficiency, keep a lint roller near the machine, one by the iron and another in your sewing bag.

Some brands perform better than others, but a good one to try is Scotch-Brite. Others swear by IKEA lint rollers.

You can also find lint rollers on long handles for use on the floor. And, a money-saving option is a lint roller that can be washed off and reused. Explore the options using the links below.

If you don’t have a lint roller on hand, wrap wide tape, sticky side out, around your hand and pat the surface you want to clean up.

Or, save on buying refills by using the method shown in the video below. Packing tape, duct tape and more work just fine, and are likely to be stickier than typical lint roller tape.

Image Source: The image at the top of the page is from A Quilting Life.