The Difference a  Few Short Years Can Make!

Quilters from all over love Jenny Doan from the Missouri Star Quilt Co. Her many tutorials are always instructive and she’s so personable and endearing.

Largely because of her popularity, Missouri Star Quilt Co., founded in 2008, has grown rapidly into a quilting phenomenon – as has the small town where it’s located, Hamilton, Missouri. 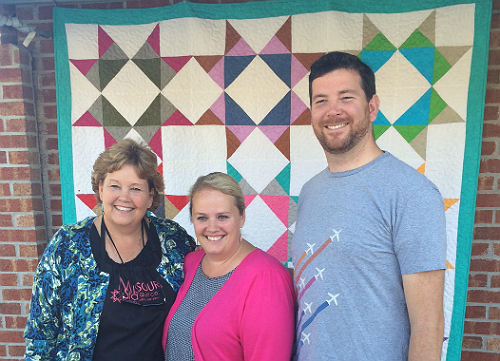 Photo of Jenny and her children, Sarah Galbraith and Alan Doan, who own Missouri Star Quilt Co. Image from Missourinet.

Jenny goes into more depth about her background and the founding of the company in the following video. It was produced by Top of Mind in 2014.

Jenny’s story is truly amazing, and reminds us that anything is possible with a good heart, hard work, and a loving network of family and friends.

Learn more about the founding and growth of the Missouri Star Quilt Co. on its About Us page.

– The image at the top of the page is from KCPT.org.