And, How the American Flag Acquired That Name!

Have you ever wondered how our flag became known as “Old Glory?” The first Old Glory was named by its owner, sea captain William Driver. He received the 17′ x 10′ flag in 1824. It was sewn by his mother and a group of admiring young women when at the age of 21 he was appointed commander of his first ship.

It flew from the mast of his ship as he sailed uncharted seas as an American merchant seaman (he ferried survivors of the HMS Bounty from Tahiti to Pitcairn Island under the flag). 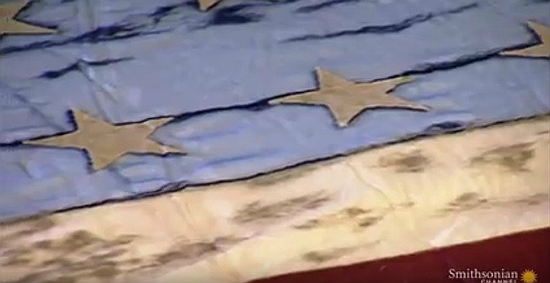 “It has ever been my staunch companion and protection,” he wrote. “Savages and heathens, lowly and oppressed, hailed and welcomed it at the far end of the wide world. Then, why should it not be called Old Glory?” – from Smithsonian.com

After the death of his wife, in 1837 William and his three small children settled in Nashville, TN, where he displayed the flag “rain or shine” in front of his home. However, the flag came under siege during the Civil War.

“During the Civil War, no flag became a more popular symbol of Union loyalty than the worn and imperiled standard belonging to 19th-century sea captain William Driver, who was originally from Salem, Massachusetts. His defiant flying of it—from his Nashville, Tennessee, household during the midst of the conflict— made national news.” – from Smithsonian.com

William took great pains to protect the flag and to keep it on display as long as he could during the war. At one point he hid the flag from Confederates attempting to seize it by having it sewn inside of a quilt.

The flag survived the war and is now in the possession of the Smithsonian National Museum of American History. The following video provides a look at the now-fragile flag.

You’ll find more information about William Driver and his well-loved flag in the following Smithsonian article.

It’s a fascinating story, especially when he presented the flag, still inside of the quilt, to Union commander, Gen. William “Bull” Nelson, so it could replace the Confederate flag flying over the Tennessee capitol statehouse.

Click here for the “How the Flag Came to be Called Old Glory” article.